After Seven Years in a Dark Barn, Lily Jane Finds Light and Life 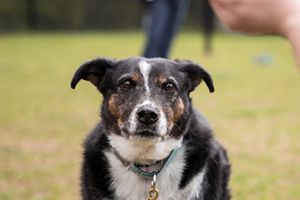 Inside an old barn—without fresh air or much sunlight, fresh water or food, or even the care and comfort of human contact—lived over 70 dogs, likely wondering if they’d been forgotten. Among these animals in need was Lily Jane.

In the barn, there was fecal matter covering parts of the floor. Empty, torn up bags of dog food were strewn about as if they’d been thrown into the barn without much care. 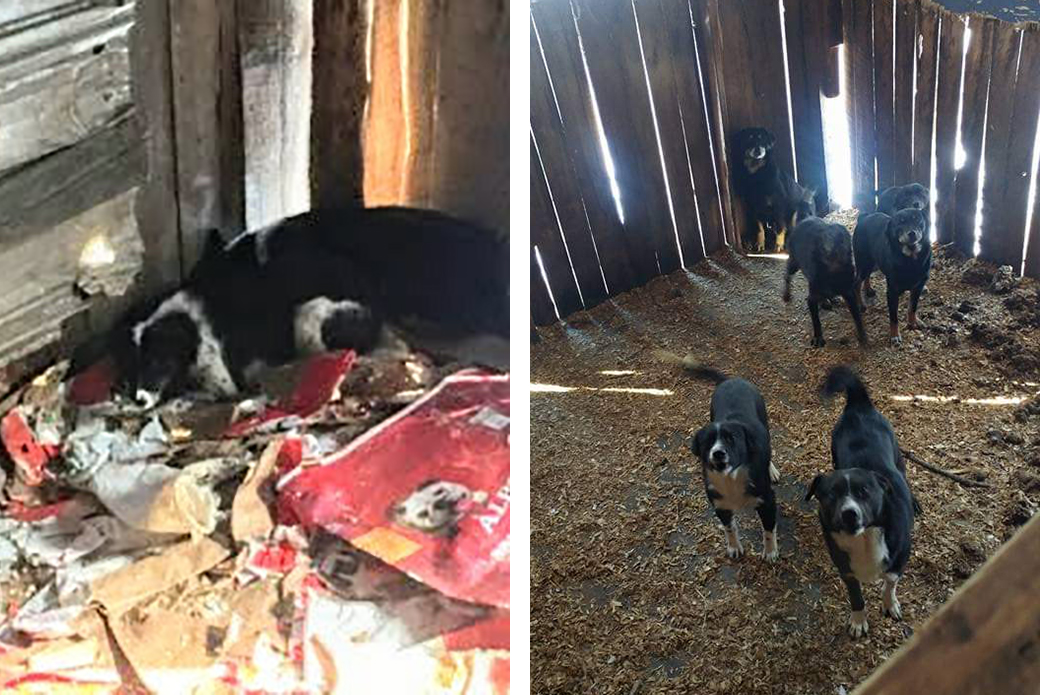 It was a heartbreaking hoarding situation in Tennessee, and in November 2017, Lisa D., President of rescue group The Grateful Dog, led the rescue efforts to remove the suffering dogs from the property and out of that barn for good. It was reported that some animals had been there for as long as seven years.

Lily Jane, a Border Collie-mix, was found in the first stall of the barn standing near a small dog who was suffering from untreated medical conditions. Lily Jane stayed by the dog’s side, protecting her until responders could remove both of them from the terrible scene. Rescuers then rushed the small, ailing dog to the vet, but sadly, she passed away hours later. Lisa D. believes that Lily Jane stayed with the dog, perhaps helping to keep her alive, until she knew help had come for her.

Lily Jane protecting a small dog who was suffering from untreated medical conditions. Nearby, a rancid water bowl.

Once all the animals were removed, they were then given immediate care and treatment that they’d been cruelly denied for years. Lisa D. began to transfer and place the dogs who were ready for adoption. But the lack of regular activity, social interactions and all-around normal everyday experiences made it difficult for some of the dogs to adapt. Many of them were extremely fearful and unable to cope with new and frightening real-world experiences.

Lisa D. contacted the ASPCA Behavioral Rehabilitation Center (BRC) in Weaverville, North Carolina, for help in giving these innocent dogs a second chance at real lives away from neglect and the darkness of their past. Our Rehab Center is the first and only permanent facility in the United States dedicated to the rehabilitation of severely fearful, homeless dogs.

Before Lily Jane and her canine companions made their way to North Carolina, Sarah S., Administrative Coordinator at the Rehab Center, first met the special dog on paper. She was reviewing Lily Jane’s intake paperwork and was touched by Lisa’s words: “She’s a special soul. And during seven years, locked in a dark barn, she’s not lost her will to be a companion—she’s just lost her way. She is very cautious and unsure. I truly believe she will be a loving and loyal companion.”

Years of neglect left Lily Jane emotionally scarred, but no one ever doubted that she was beyond helping—especially Sarah. When she arrived at the Rehab Center, Lily Jane was shut down. She was afraid of everyone and she stayed glued to the bottom of a crate in her kennel. Leashing was especially difficult, and once on leash, Lily Jane would try to flee and seek out hiding spots. 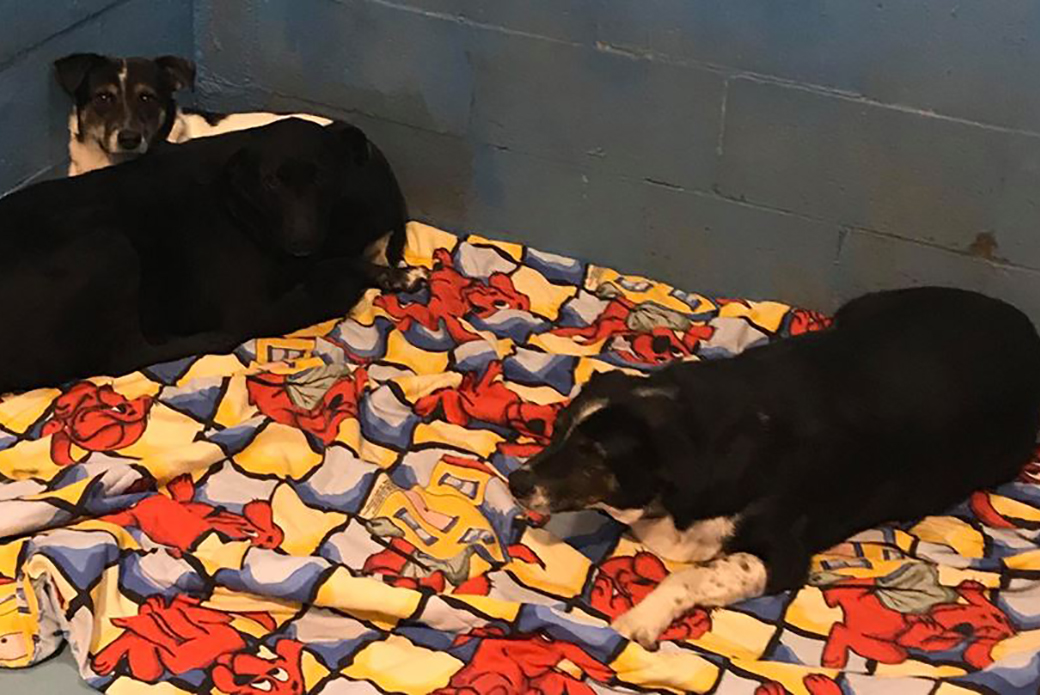 “Her temperament was super fearful,” recalls Behavioral Rehabilitation Specialist, Lisa Marvin. “She did not engage with anyone. She was very sensitive to noises and submissive, freezing at times. She would even defecate and urinate.”

On Lily Jane’s first evaluation, she received a D evaluation grade in every category, including: leashing, walking, handling and socialization. This meant that she exhibited extreme fear for most of her evaluation. In addition, she showed no signs of social behavior toward handlers and her body language indicated severe anxiety. Things that may seem normal to an average dog, like walking on a leash or being petted, caused Lily Jane immense stress and fear. It was heartbreaking to see. For the first time in her life she was physically free to explore the outdoors, but mentally and emotionally, Lily Jane was still trapped in that barn in Tennessee. 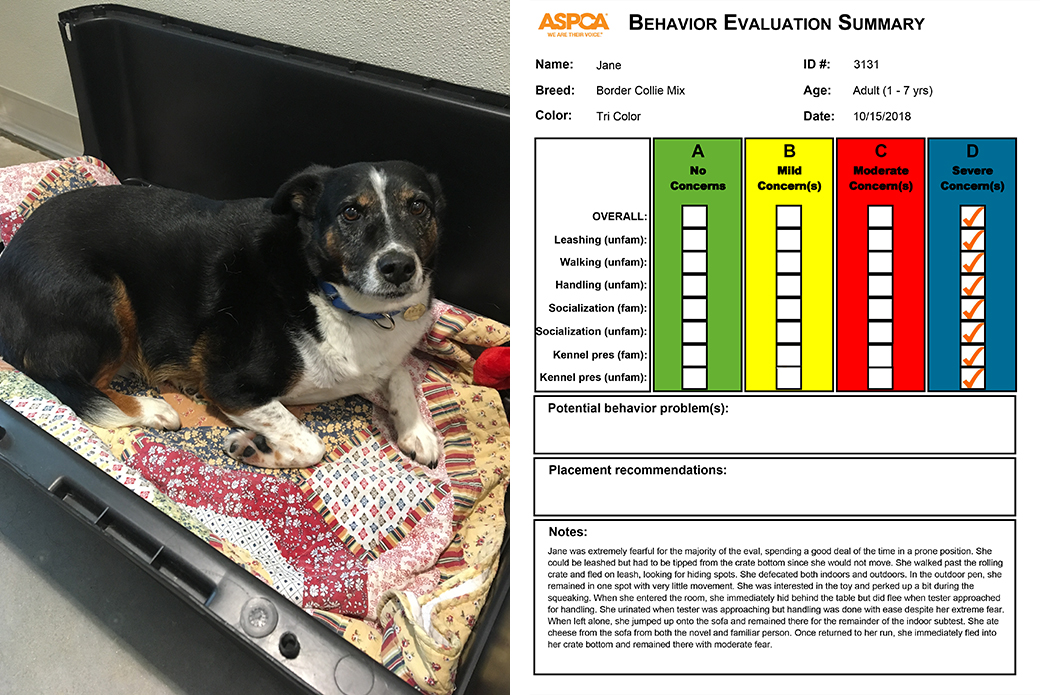 On Lily Jane’s first evaluation, she received D’s in every category, meaning she exhibited extreme fear.

Our Rehab Center team uses positive reinforcement training and protocols to help dogs like Lily Jane overcome their anxieties. They introduced a helper dog to Lily Jane’s treatment because she was more comfortable around other canines. A helper dog is a social, confident, people-friendly and dog-friendly dog. Dogs in the rehabilitation program can follow a helper dog’s lead and slowly learn to trust people and become more comfortable with human interaction.

When dogs like Lily Jane see a helper dog interacting with a human—taking a treat from their hand, playing fetch with a toy or receiving a scratch behind the ears—they pick up on the helper dog’s confidence and cues and might try out that behavior too.

One helper dog named Goliath had a special connection with Lily Jane—he was rescued from the same hoarding situation. Our team realized that Lily Jane’s behavior would change drastically when she saw her friend Goliath.

“Lily Jane would relax and get excited and that helped her tremendously move forward. Goliath was really social with us, so she learned to become confident from him,” says Lisa Marvin, who continued to oversee Lily Jane’s progress at the BRC. “We would always make sure Goliath was a part of her treatments, and that’s when we really started to see her personality come out. She would start getting social with us and that was really exciting because that’s a huge breakthrough for a fearful dog.” 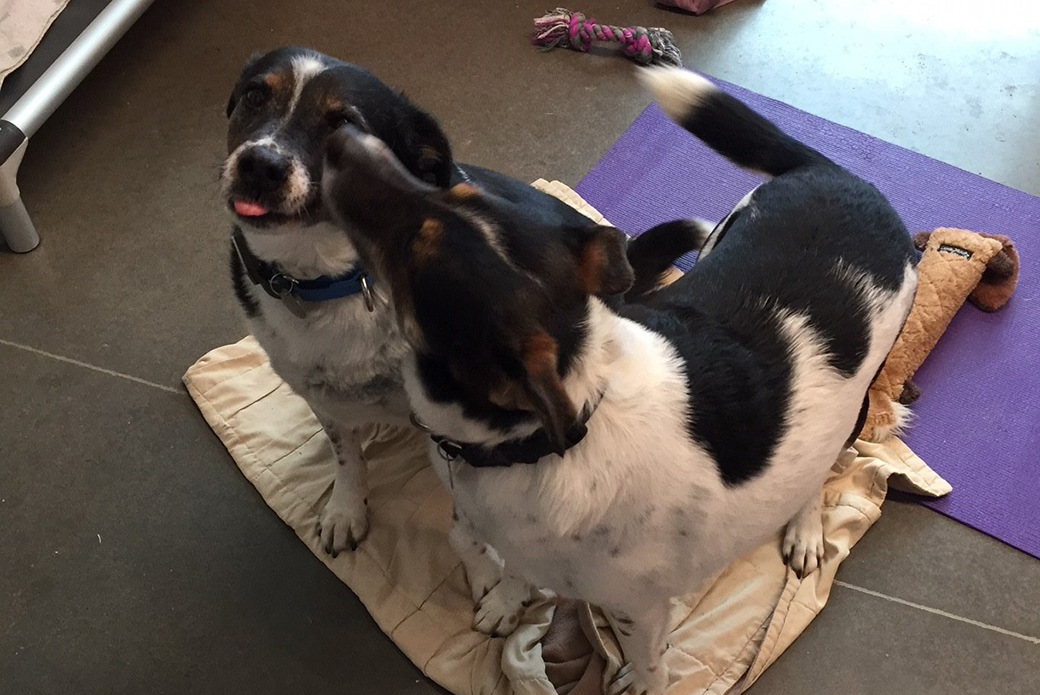 Sure enough, as our team worked with Lily Jane day in and day out, she slowly began to show incredible progress. On her next evaluation only a few weeks later, her grades went from D’s to C’s. And a few weeks later, C’s turned into B’s. After just over nine weeks in treatment, Lily Jane started earning A’s in nearly all categories, exhibiting little fear of people, objects and environments that had once terrified her, and proving that her time in the rehabilitation program was nearly complete. Her next step would be a big one, as she would take the leap into finding a family who would appreciate just how special Lily Jane is and help guide her in the real world. 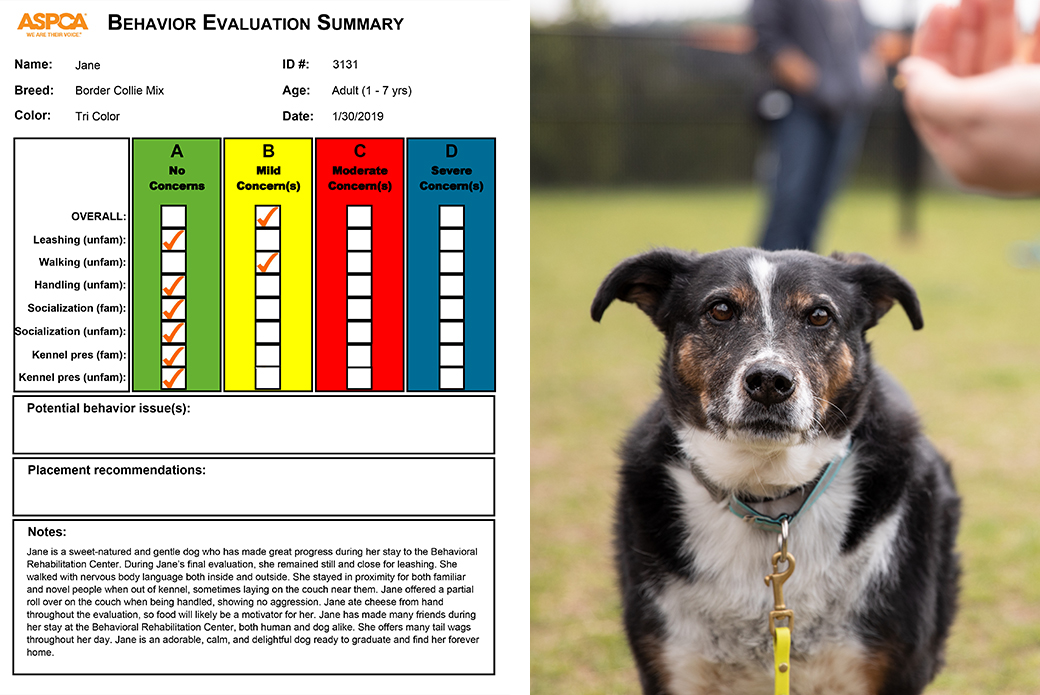 After just over nine weeks of hard work, Lily Jane went from D’s to A’s in nearly all categories. With her traumatic past behind her, she was ready to join a loving family.

In her last evaluation, our team wrote: “Lily Jane has made many friends during her stay at the Behavioral Rehabilitation Center, both human and dog alike. She offers many tail wags throughout her day. Lily Jane is an adorable, calm, and delightful dog ready to graduate and find a loving home.”

In a serendipitous turn of events, we soon discovered that someone had already noticed what a great dog Lily Jane is—and it was a familiar face.

Around the same time that Lily Jane was graduating, Sarah and her husband were looking to welcome a dog into their family, which already included a few felines. When they were ready to adopt, fellow staff members recommended a few dogs, but when Sarah spent some one-on-one time with Lily Jane she knew it was meant to be.

“I think what got me was just her gentle soul and presence,” Sarah says. “She seemed to be so calm and comfortable with me.” 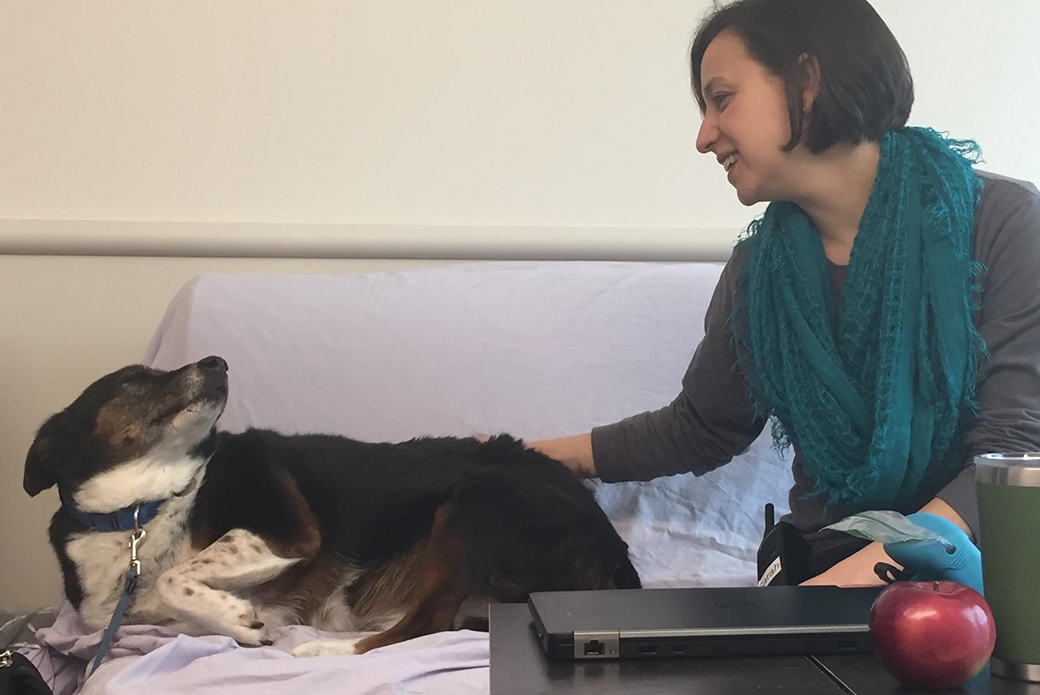 Sarah spending one-on-one time with Lily Jane at the BRC.

Sarah, who knew Lily Jane since she had first read her heartbreaking intake papers, knew Lily Jane would be a great fit for her family and officially adopted her. From those first few moments at the BRC, to her adoption day, it seemed as though Lily Jane’s journey was always meant to bring her to Sarah.

But Lily Jane’s adjustment to her new home took time. She had frequent nightmares and would start howling in the middle of the night, waking herself up along with Sarah, her husband and the cats. But little by little, with the support of a family who loves her, Lily Jane felt more comfortable in her new home. She began to blossom into a confident and loving dog even more than she already had. 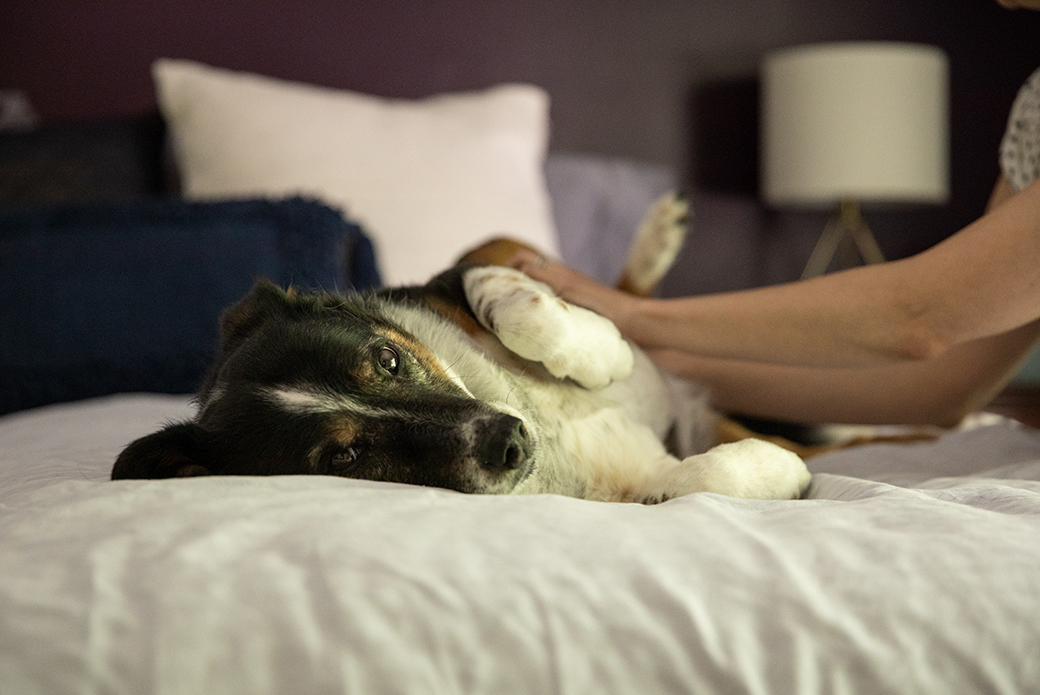 And now, Sarah is not the only one in the family with a job at the Rehab Center! Lily Jane goes to work with Sarah several times a week and works as a helper dog for other fearful dogs, showing them how to be confident around humans and new environments.

But don’t worry, Lily Jane takes plenty of breaks too. 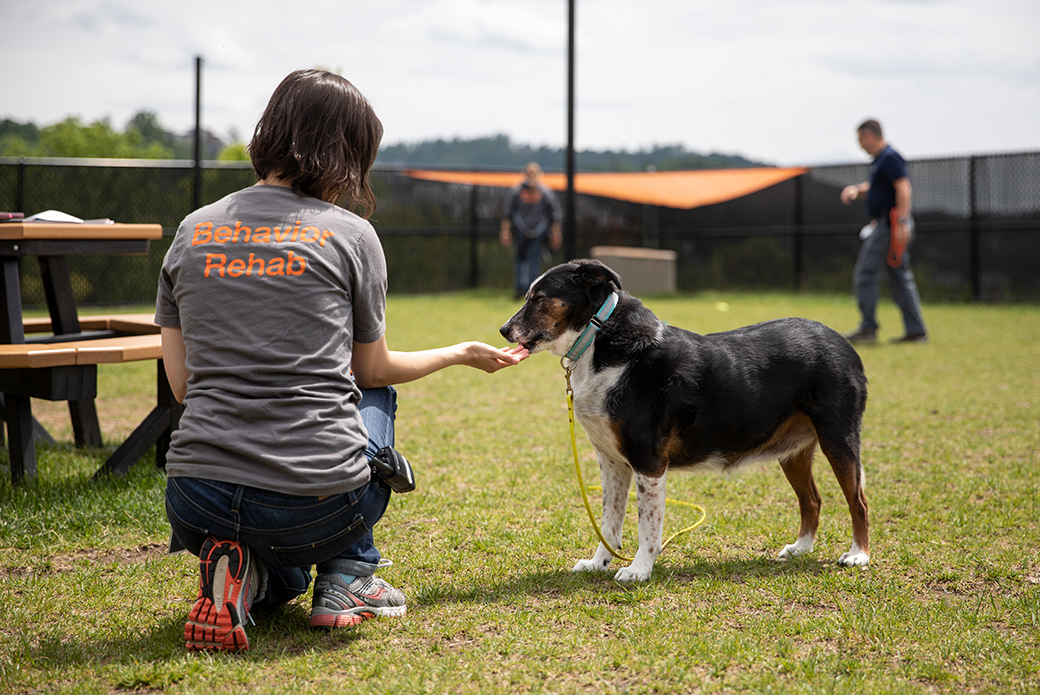 Lily Jane receives a treat in the play yard, getting ready to help some dog friends still in treatment through her role as a helper dog at the BRC.

“We’ll go for a walk around the BRC on our lunch break and go into the big play yard and she’ll play a bit, but then she’ll lay on the ground and let me scratch her belly for a long while,” Sarah tells us. “Her little back legs stick straight out and she’s got her head lolled back in the sunshine. It’s the cutest.”

Despite her tragic beginnings, Lily Jane’s compassion for other animals has always endured, even beyond her role as a helper dog. Today, she lets her feline siblings groom her and give her kisses on the head while she patiently rests.

Lily Jane’s journey from fearful dog trapped in a barn to confident, beloved helper dog who is helping rehabilitate fellow animal friends, has truly come full circle. Her Graduation Certificate from the BRC hangs proudly on Sarah’s fridge, a reminder of the remarkable feats even the most fearful dogs are capable of when given a chance to succeed.

“Without the BRC, Lily Jane would not have made it,” says Sarah. “And that breaks my heart to think about. Everyday I’m so grateful to the team at the BRC for taking that fearful dog to the couch potato she is today. My advice for someone considering adopting a rescue dog is to do it as soon as you can.”

Year-round at our Rehab Center, our staff are helping dogs undergo incredible transformations to become beloved pets. Without this work, dogs like Lily Jane may never know the comforts of a loving family or a warm, safe place to rest their heads. Our rehabilitation work would not be possible without ASPCA supporters like you. 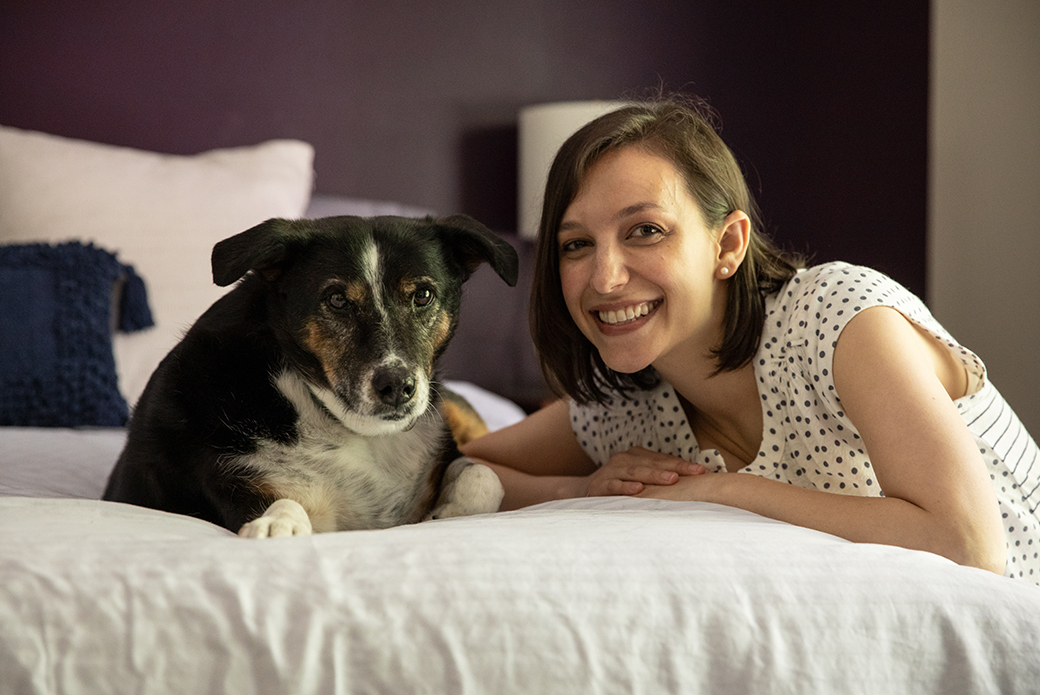 Behind every animal rescued and every happy ending at the ASPCA is a generous friend like you. Please help us find loving homes for animals—and make more second chances possible—with your special gift today.

Here Are 24 Scooby-Doo Lookalikes To Celebrate His 50th Anniversary