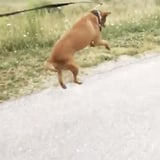 I don't know about you, but I've spent the better part of my morning hardly being able to focus on anything other than this adorable video of a dog literally jumping for joy while out on a walk with his owner. The Pit Bull in the video is named Tatum, and the short clip was apparently taken while he was out on his first walk after being adopted by his new owners, so that explains why his energy level is at an all-time high.

I've seen dogs get excited when it's time to go outside, but this is something else - he reminds me of the wind-up toys I used to play with when I was a kid. File this under: videos I can watch on a loop for the rest of my life. Watch the video above, then head over here to see another good boy sprinting through the park as soon as he spots his grandma.

People Are Delighted By Darius, The Rat Whose Artsy Owner Taught Him How To Paint With His Feet