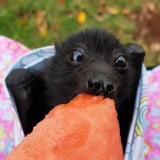 Bats might give some people the heebie-jeebies, but this video of a baby flying fox (aka a fruit bat) chowing down on a slice of watermelon for the first time has us rethinking everything we thought we knew about these Halloween-loving creatures.

It's not often that you see a bat up close, which is why most of us probably think of cartoon vampire bats and Halloween decorations whenever they're mentioned. But this baby bat named Storm - from Wings Paws 'n' Claws Flying Fox Rescue and Rehab Center in Queensland, Australia - is only interested in being swaddled up like a baby and munching on her giant watermelon slice, not spooking the Scooby gang or turning into Dracula.

"Did you know that flying foxes are a keystone species? This means many plant and animal species depend on them for survival," the bat rehabilitation center captioned its post. "If you see a sick or injured bat, do not touch it. Call your nearest wildlife rescue group. No touch, no risk." While I, personally, don't plan to go near a bat anytime soon, I do think watching this one nibble away at some fruit is pretty dang cute.

Japanese Guy Imagines Humans With Skeletons Based On Different Animals, Explains The Science Behind Them