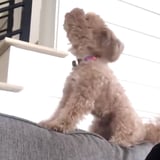 here’s a video of my dog throwing a tantrum cause I didn’t give her my waffles... 💀 pic.twitter.com/4nvyxyJ8L0

I can proudly say that I haven't thrown a proper tantrum since I was a child, but as someone who loves both waffles and precious dog videos, I have to say that I can absolutely relate to the dog in this video, who's seen throwing a fit because her owner wouldn't give her his waffles. On Monday, beauty guru Manny MUA, shared the video of his 2-year-old poodle, Zaya, with his Twitter followers, and I honestly can't stop laughing at the way she dramatically howls right after he firmly tells her "No."

Zaya is absolutely adorable, and her dramatics almost make me sad that she didn't end up getting a taste of those Eggos. Manny mentions later in his thread, though, that he didn't give her any waffles because they had chocolate chips in them, and as we know, chocolate can be pretty harmful for dogs. Oh well. There's plenty more food where that came from, Zaya.

People Are Posting Pics Of Animals With Threatening Auras, And Here Are 60 Of The Best Ones

Here Are The Best Pet Product Deals This Week